There has been a successful Spanish Ley 57/68 case for a development in Residences du Soleil, Alcudia Smir (Morocco – see judgement below), in which there were Spanish bank guarantees and payment was received by a Spanish bank. The ruling has laid the groundwork for reclaiming funds paid for property in Morocco’s Residences du Soleil in Alcudia Smir. It was originally sold by Spanish company Fadesa, but was then transferred to Excelia. From there it was purchased by one of Morocco’s largest developers, Addoha. 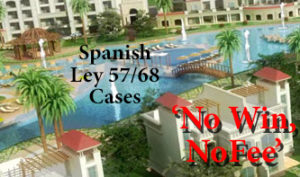 As a result of the ruling these cases can now be taken under Spain’s Ley/57/68 legislation (What is Ley 57/68).  These Spanish legal cases are taken against bankers for the developer, rather than the the developers themselves, so payment is guaranteed (with interest) when successful.

Residences du Soleil in Alcudia Smir was very heavily promoted in the UK and Ireland in the mid to late 2000’s. There are many foreign owners on the development.

It was clear, however, by 2010 that there was no activity on-site and subsequently very little was actually built. Letters and emails would occasionally arrive from Excelia looking for money. Excelia took the development over when Fadesa, one of Spain’s largest builders, was declared bankrupt. These communications would claim that a deal had been done to get the development restarted, but nothing happened for years until Addoha took over.

What do I need to do to reclaim payments made for Alcudia Smir in Morocco?

Firstly, your money needs to have been transferred to a bank in Spain. The legislation used is Spanish, if money was transferred to a Spanish bank account (even just a portion of it – but we’ll only be able to reclaim the portion sent to the Spanish bank account) then a claim can be made. If all of your money was sent to Morocco, unfortunately there is nothing that can be done in this instance. If your money was sent to a solicitor in Spain it will be necessary to find out where that money was ultimately sent.

After that the procedure is fairly simple. You will need to fill out a simple Word document questionnaire which you can download here (or just email Morocco@SpanishReclaim.com for a copy). Fill this in and return it to this email address with copies of the documents requested there (mainly signed contracts and transfer proof documentation). Once received a FREE ASSESSMENT will be carried out (no matter the result of the assessment of your documents, it is totally free). Following this you will be informed what can and what cannot be done. If it is possible to take your case it will be on a ‘No Win, No Fee’ . The cost on completion of the case is 35% of the recoverable amount (principal plus interest recovered) plus Spanish IVA (VAT) on the fee portion.

If you are happy with this you will be issued with a contract and asked to fill out a Power of Attorney document so that actions can be taken on your behalf in Spain. Cases can take up to four years to travel through the Spanish legal system (depending on whether the bank appeals or not, which they usually do), but you will be required to do nothing further.

But DON’T DELAY, the ability to reclaim through Ley 57/68 expires in October 2020. The Spanish legal system has been slowed considerably by COVID-19 and shuts completely during much of August and September. It is, therefore, imperative that you make your application as soon as possible. It can take time to get the appropriate documentation together to get these cases into court, so TIME IS OF THE ESSENCE.

Download your questionnaire here and return to this email address without delay.