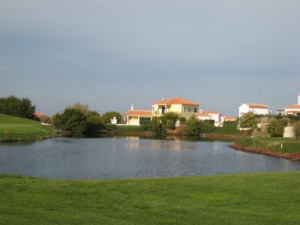 Lying between the cities of Porto and the capital, Lisbon, you’ll find the Silver Coast which is rapidly evolving into the new Portuguese property hotspot. Although it doesn’t encounter the temperatures of the Algarve, it still enjoys an excellent climate and boasts proximity to the wonderfully historic and picturesque city of Lisbon.
The coast, known locally as the ‘Costa de Prata’, is home to kilometres of unspoiled, crowd-free white sandy beaches which take on the full force of the Atlantic, lowering summer temperatures and making it a popular windsurfing destination.

Prices in the region are below the country’s average and considerably lower than those found in the Algarve. The area’s flagship development is Praia D’El Rey, near the historic town of Óbidos, which celebrated its tenth birthday last year, and is given much credit for putting the Silver Coast firmly on property investor’s radars. The course won both European Golf Resort of the Year and Portugal’s Leading Resort at the World Travel Awards in 2007. Here over 800 villas, townhouses and apartments surround a highly rated championship golf course, a tennis centre and a five star Marriott beachfront hotel. The 6,405m par 72 course is immaculately maintained and equally suitable for scratch golfers and amateur hackers alike. The back nine plays largely along the coastline which makes it very picturesque, but also a bit breezy on occasion. The front nine is pine surrounded parkland.

This is a mature course with long-standing planning permission which allows it to build very close to the coast. The current course is nearing build-out but there is some property still available. The company is in the process of designing a new course right next to this one, on the coast in front of the Royal Obidos course, which once belonged to Oceanico, in the autumn.

A course nearby course well worth a mention is that at Bom Sucesso. This is a new course, it doesn’t open for play until later this summer, designed in a very unique manner. No fewer than 23 award winning Portuguese and international architects have been given the task of designing what is most certainly one of the most unique golf developments you’ll ever encounter. Most highly regarded are probably the David Chipperfield designed villas, which are selling from €1.4m, but there are many creative designs to choose from encompassing villas, townhouses and apartments. Don’t expect to find any ‘traditional’ Portuguese architecture on the course. Jessica Kuerten’s Quintas de Óbidos next door may be more to your liking in this instance but one of the 16 villas will set you back serious money.

Campo Real is a Donald Steel designed course in the heart of the rolling Oeste region close to the small town of Turcifal. It is 30 minutes north of Lisbon and 15 minutes from the beach. The course is designed to embrace the natural contours of the land on which it sits so most of the hazards are natural rather than man made. It is more challenging than your average resort course so it will suit those who want to do more than saunter through a characterless and unchallenging round of golf. You won’t become blasé about playing this 6,009m. long par 72 course, even if you do so several times in a week.

The resort at one stage featured the first Westin hotel in Portugal, with a spa, gym, indoor and outdoor pools. The Westin group, however, decided that the hotel wasn’t worth keeping in its portfolio so it is now running under its own banner.  You can also make use of a state-of-the-art equestrian centre, tennis courts and a multi-purpose playing field. 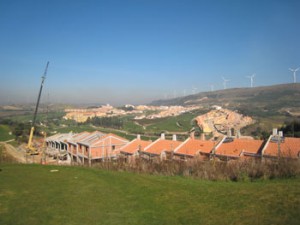 Campo Real Windmills on the Hills

Property in Campo Real is well built but very expensive considering where and what it is. The line of windmills along the hills in the background (see picture) is also quite an eyesore. Considering the golf course is, in all honesty, way too difficult for the average golfer, it is difficult to recommend the resort.