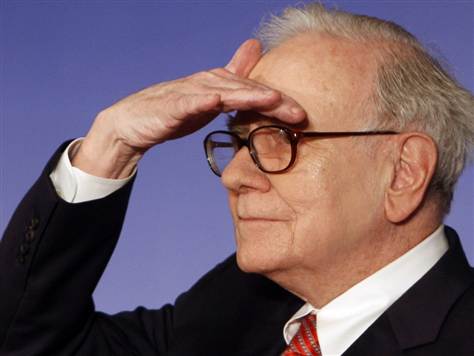 People in the US in particular, but also much further afield, put a lot of faith in what Warren Buffett thinks and subsequently says. Not without reason as he is, without a doubt, one of the world’s most successful investors of the past several decades. His value investing philosophy has seen his company ride out many bubbles and bursts, not least the one from which the US is struggling to emerge.  He is not, as he admits himself, always right, but as he said himself, you just have to be right more often than you are wrong. His ill-conceived investment in AIB at the height of the Irish boom won’t go down as one of his best decisions, but in the main he’s been right about a lot of things. When he says things, therefore, people tend to take notice.

If Warren Buffett is to be believed the slump in the US housing market has been banished to history for now and the country’s housing market is set for a rebound. He’s voting with his feet and is now actively involved in the US property market, a place he has shunned for a number of years.

Buffett explains his bullish position on US property with his usual clear and rational reasoning:

“Every day we are creating more households than housing units. People may postpone hitching up during uncertain times, but eventually hormones take over. And while ‘doubling-up’ may be the initial reaction of some during a recession, living with in-laws can quickly lose its allure.

“At our current annual pace of 600,000 housing starts – considerably less than the number of new households being formed – buyers and renters are sopping up what’s left of the old oversupply. (This process will run its course at different rates around the country; the supply-demand situation varies widely by locale.)

“Fortunately, demographics and our market system will restore the needed balance – probably before long. When that day comes, we will again build one million or more residential units annually. I believe pundits will be surprised at how far unemployment drops once that happens. They will then reawake to what has been true since 1776: America’s best days lie ahead.”

Buffett has further put his weight behind the US property market by buying up real-estate brokerages around the US as he bets on a housing turnaround. He has always claimed to be an investor that likes to invest in things that he can see and touch, which has kept him some way distant from IT startups and dot com companies with no track record for creating real wealth.

Why should you believe Warren Buffett (apart from the fact that he’s one of the richest men on the planet)?

He’s walked the walk for many, many years creating a return of 13% pa for investors in Berkshire Hathaway for the past 20 years. No other company has come anywhere close to this type of performance in all economic conditions.

Buffett famously only draws a salary of only $100,000 pa from BH, so he derives most of his wealth from the rising share price of BA. This means he’s become one of the richest men in the world by delivering value to the company’s shareholders. Investors in any other company in the world can only wish for that.

Buffett doesn’t move in a market unless he’s certain the timing is just right and he appears to think that now is the right time to get into the US property market. As he told investors in 1998 and has repeated on several other occasions, “We don’t get paid for activity, just for being right. As to how long we’ll wait, we’ll wait indefinitely.” Buffett ceased all property market activity in 2009 and has only recently started to see it as a viable investment vehicle again.