Home News Why so Tough on Leaseback?

Why so Tough on Leaseback? 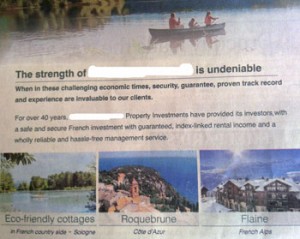 French Leaseback is Advertised as an Investment

My stance on the investment value of French leaseback property was queried during the week again, so rather than look like a stone, with unwavering views, I said I’d better discuss it briefly again.

I don’t actually have a problem with leaseback, per se, although I would have to contend from the emails that make it to my inbox that it has proven to be a very problematic investment for Irish citizens in general over the past few years.

The biggest problem at the moment is that many companies, rightly or wrongly, claim that they can’t pay rents due to the economic downturn. From what I can gather from connections in France this is only a legitimate argument in, at most, 50% of the cases. The others are simply using the economic downturn as an excuse to hold on to extra income for themselves while withholding it from clients.

Be that as it may, lack of rental payments was not the issue I had with this particular (pretty large) leaseback vendor, because in so far as I can ascertain they actually pay their rents, and generally on time. In fact I can safely say I’ve never had a complaint about this particular company from the point of view of non-receipt of rental.

My issue is that leasebacks are being very heavily promoted as an ‘investment product’, and I don’t buy this for one minute. I’ve been in the overseas property industry for (sharp intake of breath) sixteen years now, and not once in that time have I ever been tempted to put money into a leaseback property as an investment. A holiday property with benefits, perhaps, but not an investment. For an overseas property writer I’m oddly agnostic about holiday property but that’s a story for another day.

As far as I’m concerned, an investment product has to have three critical factors. Firstly, it must be possible to purchase it at a price that allows the product to provide an adequate level of return. Secondly it must have a mechanism for providing an ongoing return over its lifetime and, thirdly, it must be possible to sell it at a level that makes it viable as an investment.

It is on this third point that I have found leasebacks to be very distinctly lacking. As far as I can tell they are virtually impossible to sell. In fact I’ve never met anyone that’s ever sold one, and I’ve looked into this in some detail.

In fact, one of my previous run-ins with this particular company was to do with this very topic. They claimed that, being a large company, they had a long list of people who wished to purchase leasebacks, as well as a long client list who had sold them. So I asked to speak with just one. Nothing, they drew a blank. In fact, they were very upset that I should ask such an awkward question. So I asked a lot of other leaseback sales companies, and none of those could put me in touch with a vendor, happy or not, either.

So I’m putting the request out there again. If anyone can provide me with the details of someone I can speak to who has sold a leaseback property then I’ll happily change my tune on the apparent inability to sell leaseback properties. In fact, if you’ve sold one yourself and want to speak with me in confidence, I’d be delighted to hear from you to discuss how you got on.

If you want to contact me personally about this issue then a quick email to info@diarmaidcondon.com should do the trick. Just beware that it does have a spam filter that will ask you to prove that you are a human being, but after that it’s all plain sailing.