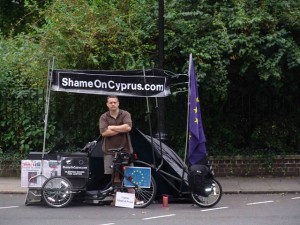 Poly Pantelides at the Cyprus Property News reports that Conor O’Dwyer has won his case against Paralimni-based Karayannas Developers but has been told to pay the developer for an online campaign that he ran to highlight his plight which the judge found to be defamatory.

The court found the developer guilty of the unlawful termination of a 2005 contract. O’Dwyer battled the case for a number of years but the Famagusta District Court has asked O’Dwyer to pay compensation to the developers because of his online campaign, LyingBuilder.com which documents O’Dwyer’s interaction with the developers including scanned documents, recordings of conversations and photographs of the villa at the centre of the dispute.

Although the court awarded O’Dwyer €141,000 in compensation, which comes to around €200,000 when including interest, he has been asked to compensate the developers to the tune of some €60,000 – over €85,000 with interest – for defamation on the website, set up in March 2006 against the backdrop of his growing dispute with the developers.

Following the ruling O’Dwyer said: “I’m being penalised because I dared express my opinion about how I was treated by the developers.” O’Dwyer’s lawyer, Yiannos Georgiades, has been instructed to appeal the court’s decision saying that European law precedents weighed heavily towards the protection of freedom of speech and people’s right to express their opinion.

Georgiades said they will also appeal the court’s decision not to award damages for expenses (travelling to and from the UK), loss of rent (by selling a home in the UK to settle in Cyprus) and damages for distress caused by the developers.

Karayannas and his son have already twice been found guilty of assault on O’Dwyer in 2006 and 2008.

You can read the full story in Cyprus Property News here.