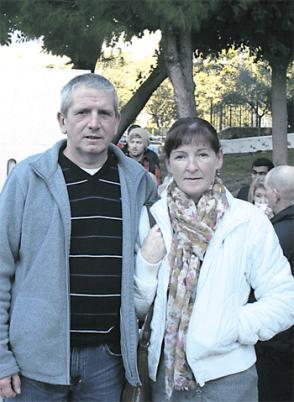 News of the Marbella court case being taken against three former Chief Executives of MRI Overseas Properties has filtered into the Irish media. The following report is from yesterday’s Irish Independent, written by Fergal MacErlean. The picture accompanying this piece is that of Brendan O’Dell and Elizabeth Egan, two Irish clients of MRI who were in Marbella to state their case.

A Spanish judge will decide whether football club boss Darragh MacAnthony will face charges after a raft of complaints from disgruntled customers who claim furniture ordered from his firm never arrived.

Hugely popular on the holiday market, MRI had hundreds of Irish customers and boasted an annual turnover greater than €100m before the credit crunch.

It made the 35-year-old Dubliner, who now owns Peterborough Football Club, a multi-millionaire.

However, a group of 51 Irish and British buyers claim that €492,000 worth of furniture, ordered more than five years ago for apartments in Morocco, Bulgaria and Cape Verde, was never delivered.

Antonio Flores, the Spanish lawyer acting for the group, claims “many other” MRI customers are affected. He alleges that missing furniture is just one of the irregularities linked to MRI, or related companies.

He said that an additional claim, totalling €15m, is being prepared on behalf of 200 Irish and British MRI customers claiming that they lost large sums in upfront fees.

If you wish to get look at reclaiming your payments straight away simply send an email with Your Name in the Subject Line to either:

Make sure to clear the applicable email address in your Spam Filter. These automated email addresses work 24/7 so you can get started right away. This will send you a questionnaire and request necessary documents to assess your case.

MRI has consistently denied any allegations of wrongdoing.

The initial complaint regarding furniture was referred to a Marbella court and is being heard by Judge Beatriz Gomez-Escolar at the Court of Instruction.

Under Spanish law, individuals can initiate criminal procedures in some cases.

The judge will now decide whether Mr MacAnthony and five other defendants should face the charges of “misappropriation of funds and theft by swindle”.

Among those wielding placards outside the Marbella court were claimants Brendan O’Dell (52), who works for a pharmaceutical company, and his partner Elizabeth Egan (52), from Corofin, Co Clare.

The couple paid €14,000 for a furniture pack for their Moroccan apartment which they claim was never delivered.

“It’s a joke. This has been dragging on for five years. Like everyone else here we are determined to get our money back,” Mr O’Dell said.

Claimants John and Muriel Andrews, from Ballycarry, Co Antrim, were also at the court. They paid MRI €29,900 in advance for two furniture packs, for apartments in Cape Verde, which they claim have never been delivered.

Efforts to contact Mr MacAnthony were unsuccessful last night. But he has previously said: “There are no foundations behind these allegations. I certainly didn’t do anything wrong and neither did anyone with MRI when I was there.”

He also said: “I operated a company which did thousands of sales around the world with many happy clients, but will forever be haunted by the few hundred for which it didn’t work out.”

In relation to undelivered furniture, the company has said the 2008 property crash forced several of its furniture suppliers out of business and it had to engage new ones — effectively paying twice for the same furniture order.

Also accused in the Spanish case are former MRI CEOs Michael Liggan and Dominic Pickering, Sarah O’Callaghan, and Nicola Shaw, a former director of MRI Ireland. The defendants face up to eight years in jail if convicted of the charges.

From the Irish Independent.