I’ve been asked by numerous organisations about the current state of the Irish market in terms of interest in, and obviously demand for, overseas property. 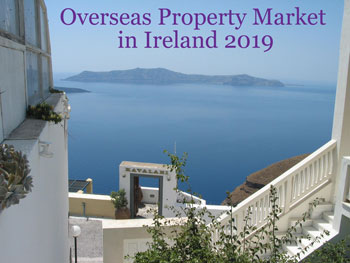 The truthful answer is that it has been difficult to gauge because there is virtually no coverage of the topic in Ireland at all. When there is, it is generally quite negative, or at least full of caveats about ‘what happened in the past’. A case in point is a new series by Ireland’s national TV station, RTE, due to air in autumn 2019/spring 2020 entitled ‘Burnt by the Sun’. You don’t need a degree of any sort to figure out the general editorial direction it will take. The Irish media is still somewhat obsessed about wealth destruction at the end of the last Irish boom and bust cycle, which is now over a decade ago. It may be time to let go.

My impression is that there should be an Irish market for overseas property. Property price rises in Ireland are now, once again, unsustainable and the economy is growing quickly, particularly around the capital, Dublin. These were the catalysts for the last surge in overseas property interest from Ireland so the likelihood that it is doing similar now is at least worth considering.

Historically, Irish interest in overseas property had been fairly lukewarm until the late nineties and early noughties. It’s meteoric rise, and subsequent collapse, was very much painted by the Irish property community as indicative of all that was wrong with the economy leading to the financial collapse which engulfed the country in the late noughties. To date overseas has found it difficult to shake this correlation, even though it is a fallacy. It is a creation to enable the property media to continue marketing Irish property, which is back in vogue and in boom territory again. It does conveniently ignore the realities of unsustainable Irish lending for property investment that drove the financial crisis in Ireland.

The truth of the matter is that of all the countries in which Irish people invested money in the run up to the financial crisis, the most money was lost by investing in – yes, Irish property. It’s not even a close-run thing, Irish property investment was by far the largest destroyer of wealth by a considerable distance. It’s an inconvenient truth for the Irish property market so it has left the overseas industry, which was minuscule by comparison, carry the can in its stead. The loss in Irish property is run a close second by the UK, which the Irish property media don’t even class as ‘overseas’. Yes, the multiple ironies are stark, but apparently totally lost on the community – or more likely conveniently ignored.

In any case, the reasons are irrelevant, the fact is that Irish property media, both traditional print and digital, carries hardly any overseas property coverage. There are those who will, probably correctly, see this as an opportunity to tap a wealthy and growing market with little or no competition.

Irish property media currently receives huge amounts of advertising from Irish property and none from overseas. Although they will be at pains to deny it, they (along with other markets, they’re not alone in this) are driven almost totally by advertising spend. Tell them you’ll be advertising with them and you’ll be almost guaranteed editorial coverage. The obvious question is, ‘has Irish property advertising re-aligned since the downturn’? The answer is a definitive ‘no’. It is still excruciatingly, and it could be argued, indefensibly expensive. Especially considering the ever dwindling readership. An eighth of a page advert will cost in the region of €5,000. This is remarkable when you consider that Irish print media, as with many media organisations worldwide, has been eviscerated by social media and online advertising and has never figured out how to make money out of digital content.

Quantifying interest in and demand for overseas property in the absence of coverage is a conundrum I was anxious to address due to the aforementioned queries. The first question is ‘what is the level of interest?’. Until recently I had no idea. But a Portuguese property exhibition running in a Dublin hotel in the early summer requested my assistance, so I used it as a barometer. The promoters advertised in some select traditional media, and subsequently got editorial coverage. In conjunction with this I ran an advertised social media campaign on their behalf with a fairly limited budget. The result was encouraging and interesting. The exhibition (which was free to enter) had 430 people sign up to attend, with 345 of them actually making it to the event. The turnout compared very favourably with a similar exhibition in London, which has almost five-times the population of greater Dublin, but had just 100 more visitors. The exhibitors were also impressed with the quality of the enquiries, with a considerable quantity declaring budgets in excess of €400k.

Of those who visited the exhibition, we estimate (it was just a show of hands, so indicative rather than empirical) that print media, as you would expect, delivered most of the leads. Interestingly though, when broken down to ‘cost per lead’, digital and traditional media both came in at roughly the same cost per visitor to the exhibition. The digital media campaign was run with no targeting other than the area in which it was run. With some honing it is likely that far greater value could be derived from its use. It can also, obviously, be trialled inexpensively.

This exhibits that absolute reliance on traditional media is not necessary and, in some instances, possibly not even that desirable. With editorial you can’t always tell your story as you would wish. You also have no control over the use of information you wish to highlight when you seek editorial content. You are at the mercy of the journalist writing the piece, which doesn’t always work as planned. Most Irish features also insist on referencing how much Irish investors have lost in any particular area in the past. Quite apart from being largely irrelevant now, it paints a rather gloomy picture for many areas which is obviously not ideal.

It appears that traditional media does still deliver results but, without paying for very expensive advertising, it is remarkably difficult to access. Most of the publications that matter will only consider stories of substantial merit and with a definable connection to Ireland. I do still write for a couple of them on occasion and, believe me, the criteria for inclusion can be pretty difficult to satisfy. If you can include one or more Irish case studies to back up your presentation it will help considerably. If you can provide a press trip to allow them to see what is being presented in person, it will also normally help your case. Just remember to research your direct routes in advance. A lot of organisations seek to annex Irish journalists to a UK press trip, proposing to fly them through London. Unless it’s a long-haul destination this generally won’t work. Journalists tend to be very time poor, the addition of a UK stopover can add as much as a day to a trip for an Irish journalist, this will generally kill their interest immediately.

From what I can gather anecdotally from speaking with agents, there is growing Irish interest in the ‘old reliables’. If you are looking to promote southern coastal Spain, the Algarve, southern coastal France, Alpine ski property and the Spanish islands (Canaries and Balearics), then there is likely enough interest to justify looking into a promotional campaign of some description in Ireland.

I have had reports of growing Irish interest in the Balkans (Croatia & Montenegro) and Florida, but these are coming from a base level of zero.

If you do wish to explore what opportunities may exist for your organisation just drop a line to info@diarmaidcondon.com or connect on Facebook (www.facebook.com/overseaspropertyconsultant), Twitter (@diarmaidcondon) or on LinkedIn (https://ie.linkedin.com/in/diarmaidcondon).

You can find a PDF of this article as it was published here you can also view it below. 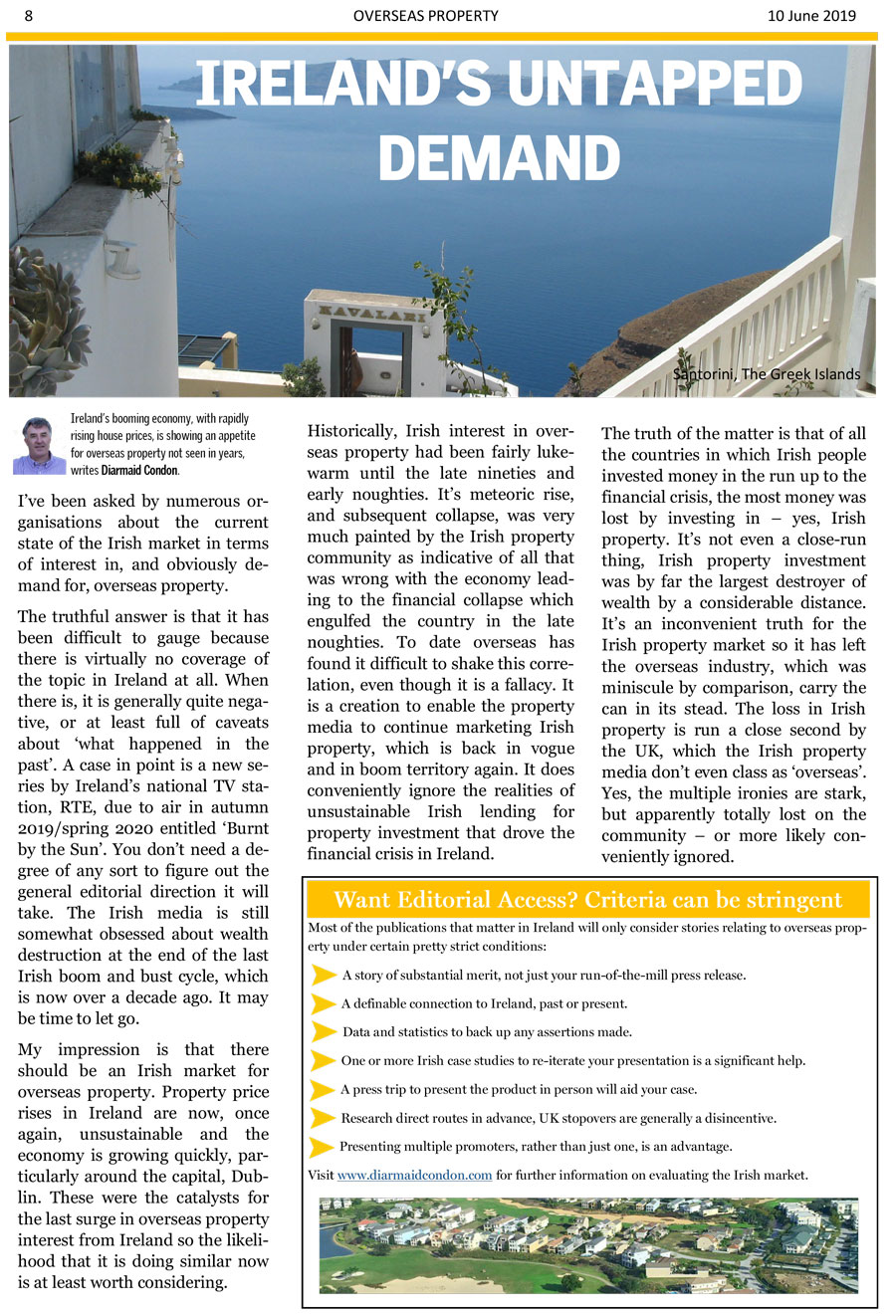 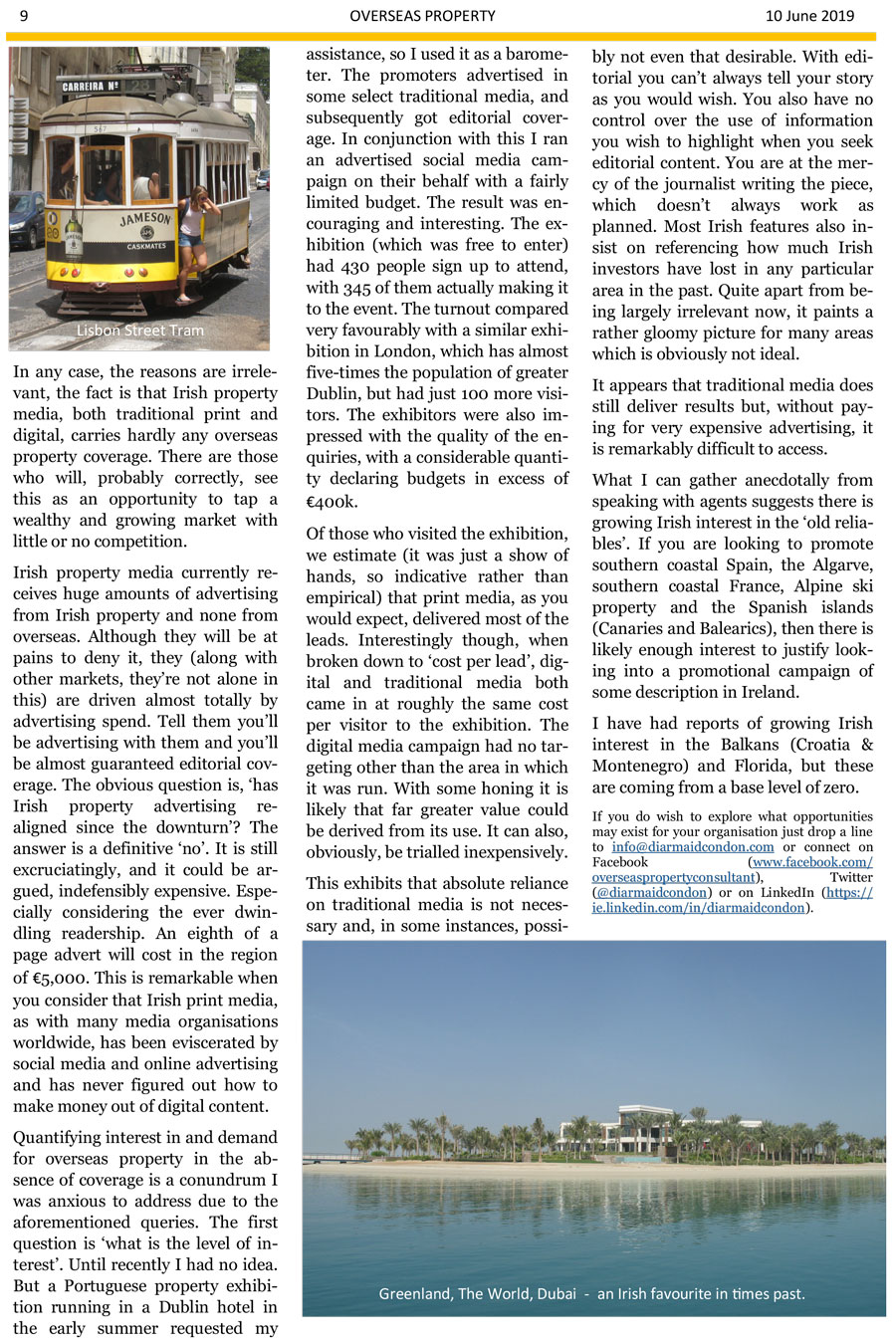