This isn’t the first time you’ll have read about the great Detroit Property Scam on this site. It’s been mentioned before, predominantly on the back of the Eddie Hobbs backed Brendan Investments vehicle’s large punt on property in Detroit some years ago. Click here for some sample of the posts on the Detroit Property Scam from back in the day. 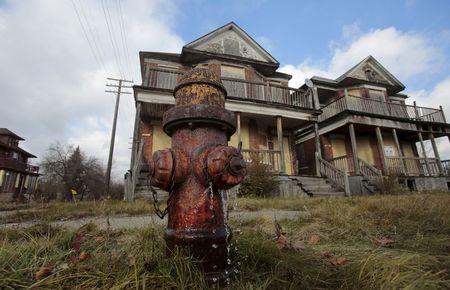 There’s a very interesting piece on Yahoo, via Reuters, on the scourge of ‘investment properties’ that were hawked all around Detroit a few years ago. Many of them are now lying derelict around the city with the unsuspecting owners having invested in shacks that are now just fit for demolishing.

A few pieces from the piece include:

“Nothing is as good as it seems,” says Des Curtis, who lives near Bristol, England. Curtis says he invested $45,000 in a Detroit house in 2011 with the promise of steady rent but had his property vandalized and deemed unrentable. “My lesson was: keep away from Detroit for many years until it’s been re-established.”

They accused Metro of buying homes in Detroit in unpopular and destitute locations for $500 to $5,000 and selling them to investors for up to $50,000, despite knowing they were unlikely to be rentable, according to the lawsuit. The firm made fraudulent guarantees about the properties, failed to do repairs when promised, and created fake tenants, the lawsuit alleged.’

In court documents, Metro said that the vast majority of investors were satisfied with their returns and the services provided.

A judge held Metro and other defendants liable to pay the plaintiffs $625,000, according to court documents.

“The case was settled with a strict confidentiality agreement,” said David Fink, lead counsel for the Metro Property Group defendants. “The case was not adjudicated, so the court never made any findings of fact regarding the allegations in the complaint or in the counter complaint.”

Schlussel is a fairly divisive character. To say her opinions on Islam and terrorism rival those of ‘The Donald’ would be an understatement. Take it that comments by Schlussel should be taken in context. It doesn’t, however, take from the fact that a lot of unsuspecting Irish and British ‘investors’ have been taken to the cleaners in the great Detroit property scam.

You can find the entire report on the Detroit Property Scam here.