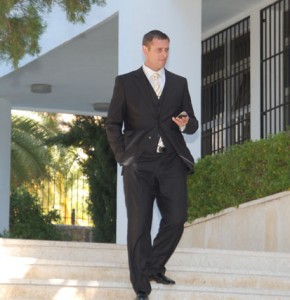 Peterborough United Chairman and former CEO of MRI Overseas Property, Darragh MacAnthony, appeared in a closed court session in Marbella on April 25th 2012 to answer charges that his company defrauded clients when taking money for furniture packs that were not consequently delivered.

Here are two reports on the proceedings:

The disgraced property mogul is accused of taking tens of thousands of euros off nearly 50 British and Irish victims for furniture packs that never arrived.

The Irish football mogul was grilled by the judge in Marbella for two hours behind closed doors.

Arriving in a white Range Rover with two men, it is the first time the football boss has faced the music in Spain.

He was joined by his former chief executive Dominic Pickering, Sarah O’Callaghan, and Nicola Shaw, a former director of MRI Ireland.

None of the accused, who have continually denied the allegations, would speak with reporters.

“I’m sure you are a lovely lady but I am not speaking to you,” said MacAnthony.

It comes three months after over 40 victims travelled to Marbella to tell a judge how the football boss’ company MacAnthony Realty International (MRI) failed to deliver over half a million euros of furniture to them between 2005 and 2010.

MRI – which boasted an annual turnover of more than 100m euros before the crisis – developed resorts in several countries from its main base in Marbella, from where it sold the furniture packs.

The alleged victims – who filed a claim in Madrid in June last year – accuse MacAnthony, 35, of keeping 600,000 euros which they collectively paid for furniture packages for homes in Bulgaria, Turkey, and Morocco.

Meanwhile, Antonio Flores, the Spanish lawyer acting for the group, claims ‘many other’ customers are also affected and due to file further claims. “The missing furniture is just one of the irregularities linked to the company,” he said.

Flores insisted an additional claim, totalling 15m euros, is being prepared on behalf of up to 200 British and Irish MRI customers claiming they lost large sums in upfront fees.
“Today was just the first step. The courts were gathering information and just listening to what everyone has to say before they decide how to proceed further,” said Flores.
“There is also another claim that will be made in the not too distant future that is substantial.”

From Penman & Sommerlad Investigate in the Mirror:

Holiday property mogul Darragh MacAnthony appeared in a Spanish court yesterday to answer charges that he never delivered furniture packs worth £400,000 to 51 customers.

The 36-year-old Irish multi-millionaire and chairman of Peterborough United was summonsed by the Marbella criminal court after the customers filed a complaint against him and his company, MacAnthony Realty International.

Lawyer Antonio Flores said the company had acted “in a disgraceful manner”, adding: “They never filed for insolvency in Spain. They simply disappeared.”

Records show that the former holiday home giant moved its registered premises to a ghost office in Madrid where it was placed under the management of a non-trading Peruvian company run by a 90-year-old man.

MacAnthony denies the accusations and has blamed the credit crunch, which forced several of MRI’s furniture suppliers to fold, and has called the legal action as a “ridiculous suit”.

The Spanish judge will decide whether MacAnthony and the five other defendants should face the charges of “misappropriation of funds and theft by swindle”.