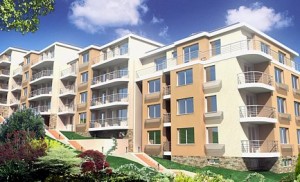 I’ve been contacted by some people who have experienced problems with the Buena Vista development near Sunny Beach in coastal Bulgaria which was originally sold by MRI Overseas Property.

The development of 111 apartments in a C shape around a swimming pool was to be completed outside the village of Sveti Vlas (500 m) about 200m from the sea. The living areas were to vary between 45 and 122 sq./m. Each building was to be equipped with a lift. The attached picture is an artists impression of what the development was to look like when completed.

We do know that they got as far as the picture below by April 2009, but we’ve nothing to show whether they ever actually completed (if they did I’d love to see pictorial evidence of this). 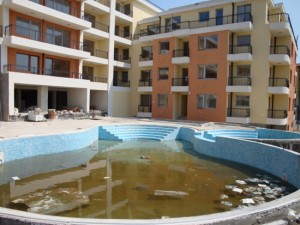 The development was due to complete in 2006/2007 but, as far as can be ascertained, there is no sign that this ever occurred, nor that it is ever likely to complete.

Most of the people involved were also sold furniture packs by MRI Overseas Properties, that also never materialised and most of them don’t even know if they actually own the properties or not.

If you invested in this particular development perhaps you could get in touch on info@diarmaidcondon.com and we can put those affected in touch with each other in order that they can weigh up their options.