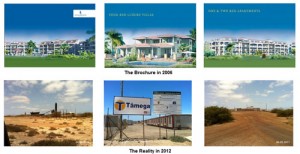 The Murdeira Beach Investors Group has been formed by private investors who have invested in 168 units in an off-plan beach front resort on the island of Sal, called Murdeira Beach Resort. The investments were made with the Cabo Verdean company Murdeira Beach Resort 1 SA (MBR1SA) via an Irish registered company Cape Verde Development. The project was supposed to be completed by 31st Dec 2010. As of May 2015 there is nothing on the site except a few excavations.

On 27th December 2014 in tandem with other investors in Cabo Verde, we submitted a Petition to the European Parliament seeking the re-examination of the Special Partnership Agreement signed in 2007 between Cabo Verde and the European Union, in light of the difficulties we have experienced at Murdeira Beach. It is our contention that the Cabo Verdean Government have failed to comply with the principle of Good Governance as required under the agreement in relation to off-plan property sales. The petition has been assigned reference no 2645/2014 and is currently under consideration by the Directorate for the Plenary in Brussels. We will be contacting José Teixeira, the EU representative in Cabo Verde (no relation to the convicted director of MBR1SA) to raise the issue directly with the Cabo Verdean Government. Secondly, we have been in contact with Mr John Marshall, the outgoing UK Ambassador to Senegal & Cabo Verde and he has raised the issue of Murdeira Beach with the relevant authorities in Cabo Verde. Mr George Hodgson, the newly appointed UK Ambassador to Senegal & Cabo Verde will be in place this summer and we will be taking up the matter with him. Mr Hodgson served as the UK Representative to the EU in Brussels in the past, so he will be helpful in that regard. Thirdly, on 17th March last, Linda McAvan, Labour MEP for Yorkshire and The Humber and Chair of the European Parliament’s International Development Committee, submitted a written question to the European Commission at our request. In her question she outlines how we believe the Cabo Verdean Government have ‘failed to comply with Articles 75 & 77 of the Cotonou Agreement regarding private sector investment including in particular Article 77 paragraph 2a and paragraph 3 on risks of expropriation, breach of contract and protection of investments’. Finally we have
also sought the support of Brian Crowley MEP for Ireland South, regarding our Petition to the European Parliament and Ms McAvan’s question to the European Commission.

The text of the Petition is as follows:

“I Richard Holland, a British Citizen residing at 36 Alexandra Road, Southport, PR9-9HH, United Kingdom am petitioning the European Parliament to reconsider the Special Partnership Agreement which has been signed between the EU and the Republic of Cabo Verde, (also known as the Cape Verde Islands). The signatories of this Petition are EU Citizens who have invested in off-plan real estate tourism projects in Cabo Verde. A number of these developments have never been completed and investors have lost a significant amount of money as a result. Numerous projects are involved but this petition specifically refers to Murdeira Beach Resort and Vila Verde Resort on the island of Sal and Sambala Resort on the island of Santiago. In
2007 a Special Partnership Agreement was signed between the EU and Cabo Verde. Among other things, one of the requirements of the Agreement was that the Cabo Verdean Government would adhere to the principle of Good Governance. The security and protection provided by this Agreement was one of the main reasons so many EU Citizens invested in Cabo Verdean real estate. In addition to the increased political and security cooperation, the fixed exchange rate between the Cabo Verdean Escudo and the Euro appeared to offer further protection for small investors from EU countries. Since signing the Agreement eight years ago, the Cabo Verdean Government has failed to introduce statutory measures to protect investors in current and future off-plan tourism related real estate projects. This is in spite of the fact that the Cabo Verdean Government is well aware of the issues surrounding these tourist developments and they have continued to receive funding from the EU. In light of this we are petitioning the European Parliament to reconsider the Special Partnership Agreement which has been signed with Cabo Verde in 2007.”

For further information on this petition please visit www.murdeirabeach.com.