Selling a Property with Extra Sales 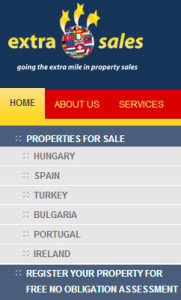 Former Extra Sales director Sean Boylan was declared bankrupt by the Insolvency Service of Ireland (ISI – https://www.isi.gov.ie) on November 14th 2016 (these ISI links only stay active for a few weeks, this one has now been removed, but we have a copy of the insolvency papers).

If you need to contact Mr. Boylan to discuss issues relating to Extra Sales or other matters you can reach him by email at seanboylan1528@gmail.com. He also uses the Irish mobile phone number 089 4630 582.

We’ve heard little enough of his fellow former director, Colin Horan, although he is reported to be carrying out much of his business in China these days.

Former Extra Sales director Sean Boylan appeared in court in March 2016 to answer accusations that he misappropriated €42,000 in Turkish sale proceeds from a client – see the report in the Irish Independent here and in the Irish Times here.

As of November 2015 the company is under investigation by the Gardaí on foot of a number of claims that the company sold property in Bulgaria and Turkey, keeping the proceeds rather than passing them on to the property owners.

Ironically these guys are also the main actors in a company called ‘Future Wealth‘. It runs with the tag line “We have a successful track record in creating and delivering profitable investments for our clients.” The liquidator and a selection of former Extra Sales clients might want to argue the toss with them on that one. They claim to be based at 88 Wood Street, 10th – 15th Floor, London, EC2V 7RS, UK with a UK phone number of 0044 161 433 8303 and email address of contact@futerewealth.com.

As with Extra Sales (see below) I’d not be inclined to trust them with your hard earned money.

If you’re considering selling an overseas property and you are based in the UK or Ireland you are met with something of a quandary. It is not until you own a property abroad and head down the road of trying to list and sell it abroad that you discover just how difficult a task it can be. This is particularly the case if you’ve got a property in a country like Bulgaria, where English is not that widely spoken, it can be very difficult to deal with local estate agents and there’s always the presumption that you’re being poorly treated at best or ripped off completely at worst. This is where selling a property with Extra Sales or a company like this comes into play.

If you are considering selling a property with Extra Sales (which then seems to have changed its name to OPES Property) or a similar company you can see the sales pitch below:

[su_quote]”Extra Sales Consulting is a company which has grown year on year in the face of global recession. Since our inception in 2006, we have had our sights firmly set on one goal….overseas property sales. In 2008 Extra Sales entered the Russian resale market and over the next 3 years, built up a substantial network of agents across Russia’s 11 time zones. This network gives us and our clients’ unrivalled access into the Russian overseas property market. Our partners in Russia are seeking quality resale properties in Bulgaria, Spain, Turkey and Hungary. It is not only Russians which account for a large percentage of buyers active in acquiring overseas resale properties. Scandinavian countries have shown significant interest in the past 6 months and Extra Sales have already established direct links to that market. Extra Sales Consulting International is head quartered in Dublin Ireland, with direct links and staff in Bulgaria, Turkey, Spain & Hungary.”[/su_quote]

So that’s it. Extra Sales’ sales pitch is great in theory, but does it work? Does the company, in fact, have the substantial Russian agent network that it claims to have and if you utilise the company will you get results? It appears that somebody feels the company is not all it claims to be and posted this fact on Done Deal. 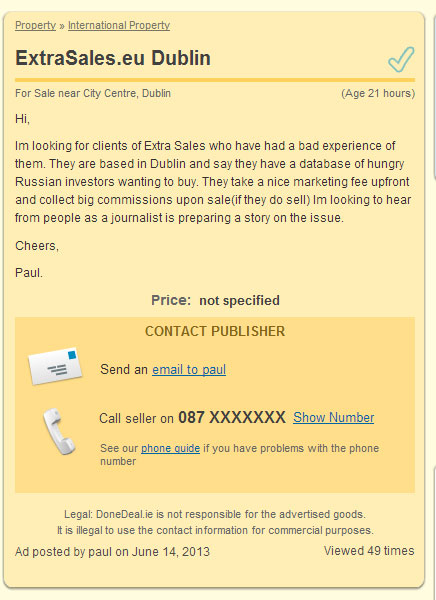 It also appears that the poster had a change of heart on the issue or Done Deal got a warning from somebody. Either way the advert disappeared within two days.

Here’s one that stuck, however. It’s on Boards.ie. Yes I am aware of the problems with forums that allow totally anonymous posting – but having said that somebody normally has to be fairly ticked off to bother – or else be a jealous competitor. So you can take this one any way you wish. In the end this guy claims he had to get the Sheriff to reclaim money he was awarded by the small claims court.

I’m not for a second suggesting that Extra Sales is doing anything wrong, rather pointing out that somebody obviously feels they’ve been mistreated by the company. Just because somebody feels they’ve been mistreated by the company does not mean that they actually have, but due process can be very difficult to come by when dealing with property in a distant country so people are inclined to take different remedial action to have perceived wrongs righted.

The problem with the Overseas Property industry is that it remains totally unregulated. If somebody wants to charge you €1,000 up front to list a property on a website claiming that it is marketing your property to Russian buyers then it is free to do so. You’ve no comeback whatsoever if you find out at a later stage that they’ve actually just stuck it on their website and sailed off into the sunset with your money. You could try the commercial court, but the amounts of money involved are so small that disaffected clients are inclined to just write it down to experience.

If this is, indeed, what Extra Sales has been doing it’s a pretty risky strategy. The company, currently being run by Colin Horan, is advertising very heavily across the country, particularly in the printed press. See an ‘editorial’ piece here in the Commercial Property section of the Sunday Business Post in May 2013 by Philip Connolly entitled ‘Investors Selling off Foreign Properties’. It’s from the Extra Sales website because you have to pay to view content on the Sunday Business Post site. The piece is worth a read, if just for the following gem;

[su_quote]With many buyers now struggling following the fanatical crash, Colin Horan, managing director oh Extra Sales, believes that there has been a timely increase in demand across Europe.[/su_quote]

I’m not sure if this appeared in the Sunday Business Post article, or if it was just the pre-editing version sent to the paper. In any case, it’s merely an aside.

The company is also heavily promoting its services through advertising on radio and TV at the moment, which means it will pick up a significant amount of ‘distressed’ sellers. For ‘distressed’ sellers you should also read ‘vulnerable’ in many cases. This also means that if the company is not behaving in an ethical fashion, it will have a large database of disaffected clients in the not too distant future, which inevitably leads to adverts like the one that appeared in Done Deal.

Note: If you have had a property listed with an agent for some time and have given that company Power of Attorney (PoA) to sell it for you, then you may wish to get a title search done on the property to make sure that it has not been sold without your being informed. I have recently come across two  cases in which this has happened. If you do not know who to contact in order to have a title search completed (any solicitor in the country in question should be able to do it fairly easily) contact me and I may be able to put you in contact with someone who can conduct this search for you. 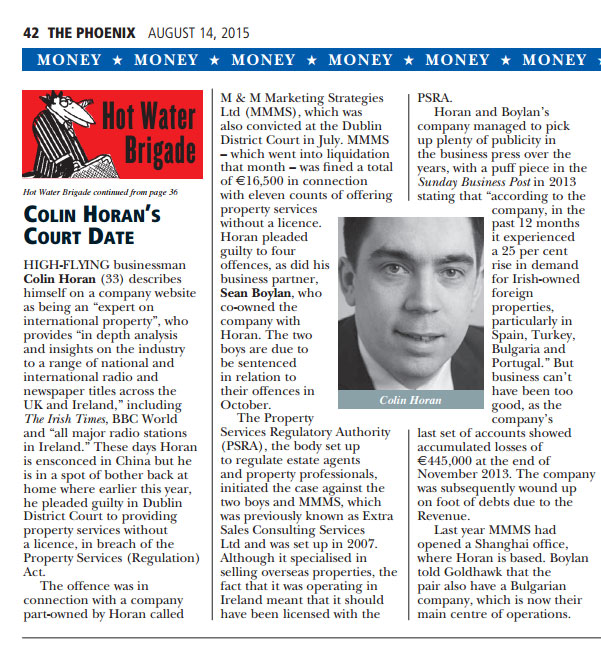 See original here (Thanks to Paul Hayles for the link).