Spanish Property Sales – How are they now Faring?

Chris Mercer celebrated 30 years in Spanish property in 2014, so we thought he might be one to ask about Spanish Property Sales and how they are now faring. His eponymous Murcia-based real estate agency notched up some interesting results last year.  Total sales for 2013 outshone 2012 by a spectacular 60%, not something Mercer, or anyone else, would have expected at the end of 2012.

Mercer says: “This time last year I was feeling very bullish about Murcia’s property market. We’d closed 2012 having done around a dozen more sales than 2011 and I was quoted as saying “I boldly expect our sales to increase by 25% in 2013 over 2012”.  I am delighted to say my prediction was wrong, miles out.  Instead we have completed 40 more sales than 2012 – an increase of 60%.” This is, indeed a very interesting statistic, particularly when you consider the overall dejected feeling of overseas property markets in the UK  and particularly Ireland.

Click here if you want information on selling your property on the Costa del Sol.

Spanish Property Sales – Who is Now Buying in Spain?

The nationality claiming the largest number of Spanish Property Sales through Mercers were the British, making a strong resurgence after some time observing from the sidelines. In 2012 it was Belgians, French, Norwegians and Swedes dominating the market, with Brits only reappearing to the latter part of the year, along with a few Germans and Dutch.  For 2013 a vast 64% of sales were attributed to Brits, with others mainly claimed by Belgians, French, Dutch and native Spanish.  There was less participation from Scandinavians, and Germans remained in the minority. Spain is certainly fortunate that it has foreigners to prop up its floundering property market.

Once more, Spanish Property Sales prices have risen.  “In 2012 our average sale price was 84,884 euros, for 2013 this figure increased to 94,000 euros”, continues Mercer.  “Property prices have held pretty steady for several months now.  I do not think that prices in our part of Murcia will slide further, but neither do I think that they will increase in the first three quarters of 2014.  Since the peak, prices have dropped 40% to 55% and we are now in a situation of fairly low prices.”

“Coming off the back of a very strong 2013, I predict a further increase in sales volume for Mercers in 2014 as buyer confidence continues to grow”, says Chris.  “If bank lending finally improves, then the market will accelerate across the board but, again, I do not think that is likely for the first three quarters of 2014.  It is reassuring to see the British contingent participating so heavily in Murcia and I expect them to carry on leading the charge this year.  And, this time, I will stick my neck out and predict at least a 30% rise in sales for 2014 over 2013.”

Mercers is setting the scene for growth having moved to a larger office premises on Camposol Golf in 2012 and growing its staff by two people in 2013 – with capacity to take on more sales experts if the property market continues on the upward trajectory that Chris expects.  “A lot depends on the Paramount Theme Park, which is now in the first stages of construction and on schedule for a 2016 opening.  But, even without this tourist attraction, the general climate and appetite for foreign property buying is on the up – as evidenced by last year’s 60% increase on 2012 figures.”

Mercers’ excellent results coincide with a report from JP Morgan entitled “Spain is Back”.  Released in January, the financial services firm predicts the country’s economy to grow by 1% in 2014 having seen encouraging results in industrial output, exports and consumer spending and confidence.  It believes that Spain’s economy has healed enough and its banks are now well capitalised.

Spanish Property Sales – What’s On the market in Murcia? 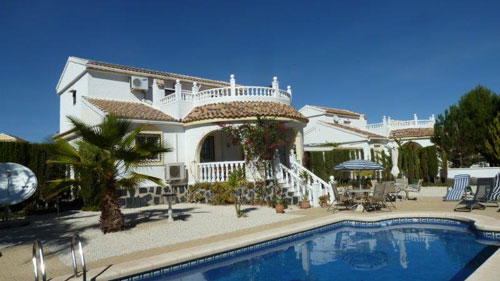 A two bedroom two bathroom villa with a self-contained two bedroom one bathroom apartment with roof terrace above – the ideal set-up for elderly relatives, two co-habiting families or a possible B&B business.

This Mazarron based home has a covered porch and the 600 sq. m. plot hosts a private swimming pool with a large pool-side terrace and two separate driveways.  The home is available fully furnished with central heating, air conditioning and installed solar panels for hot water.

Camposol Golf has an 18-hole course and plenty of shops, restaurants and bars on site including an opticians, vets, medical centre, hairdressers and a weekly market. The blue flag beaches and marina of Mazarron are within a 15 minute drive.