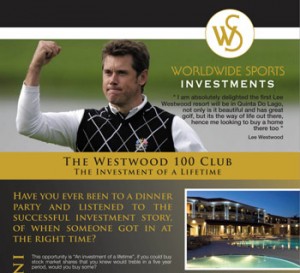 If you’ve invested in the infamous ‘Westwood 100 Club‘ (see this previous article on the product if you are not aware of it) promoted by Burscough based Worldwide Sports Investments (WSI – I won’t even link to the website, it’s been down for months), you won’t be very happy to hear that on May 5th 2012 Companies House has issued the company with a GAZ1, which is a first notification of strike-off action in the London Gazette (Section 652). In this instance it has been issued for non-filing of accounts which were due on Feb 2012. If the company doesn’t file in the next 3 months it will be dissolved.

You can see the document lodged by Companies House below:

So what does this mean for clients of the company?

Essentially it dispels any myth that the company’s owner, Chris Smullen, might return any money paid to the company by clients. Mr. Smullen, when contactable, has been busy telling clients that if they can hang on a few weeks he’ll re-imburse them in full – mind you he’s been doing this for months. To the best of my knowledge no client has ever received a penny back from him nor do I believe that they ever will.

If WSI has sold all 100 shares in the product, and I believe it may well have done even more than this, then it has taken in something in the region of £2.5m from clients and is now set to sail off into the sunset with this cash in the owner’s pocket.

I believe complaints have been made to the Burscough police, but clients should be making far more of a fuss of this, or they will get absolutely nothing back from this company.

Following the issuing of the notification of strike-off action the company has 3 months to comply then it is either dissolved, or put into liquidation. Unless it can be proven that money was taken from the company illegally clients who paid funds will have to line up behind secured creditors such as banks and are very unlikely to receive any reimbursement of their investment.

You can now see what WSI meant when it said the Westwood 100 Club was ‘The Investment of a Lifetime’.

There is an update to this post as of June 8th 2012. I got a note to say that the Compulsory Strike Off of Worldwide Sports Investments has been suspended. See the information below.

I have no indication why this has been done but the usual reason, I am told, is that a creditor has objected to the strike-off action or has taken a court action against either the company itself or its directors in order to recover funds that he or she deems have been misappropriated.

Here is the document: