This is a strange one. Worldwide Sports Investments (WSI), based in Burscough, Liverpool, is selling shares in a project it claims is backed by the very high profile International Sports Management (ISM) company run by Andrew ‘Chubby’ Chandler. WSI claims it is going to operate courses in Spain and Portugal (among other areas) in the names of golfers such as Lee Westwood and Darren Clarke.

Note: There have been a number of updates to this story over the years, all have been outlined at the end of this post.

Unfortunately for WSI, the company it claims to be in partnership is remarkably lukewarm on the deal. We wrote and asked them and got the following reply:

With regard to ISM’s involvement with WSI as referred to in your email, we can confirm that there have been some discussions between ISM, Andrew Chandler and Worldwide Sports Investments (“WSI”) regarding a possible property development in Portugal but as yet no agreement has been reached and/or entered into between ISM and/or Andrew Chandler and/or Lee Westwood and/or WSI. ISM, on its own behalf and on behalf of Lee, and Andrew Chandler, are still conducting their own enquiries. Lee’s image should not have been used in the recent advertising and must not in any way be construed as an endorsement by Lee and/or ISM and/or Andrew Chandler of the development or of Westwood 100 Club or WSI. Neither Lee nor ISM nor Mr Chandler take any responsibility in relation to any of them and you are strongly urged to make your own enquiries.

So WSI is heavily promoting a product claiming it is being endorsed by a number of players whose management company claims that they do not endorse these courses nor does it wish to have its players connected to them. Very strange. While WSI’s site (just the one page linked above) is remarkably non-specific about what the company sells or does, it just contains a video full of cliché’s and generalised drivel, other sites around the web are a lot more forthcoming. If you contact the company for its prospectus you’ll get the following, oddly poorly delivered and non-specific outline:

The offer of ‘guaranteed 200% returns‘ and just £25k as an entry level is proving too much of an enticement for many investors although, if you read through the document, how exactly the proposed returns are going to be achieved is remarkably sketchy.

The rebuke from ISM doesn’t seem to have deterred WSI in any way, it still ploughs ahead claiming to have full involvement with ISM – see here, where the company claims at the end; “With a board consisting of Chris Smullen, Andrew Chubby Chandler, Lee Westwood and Sean Keating, Worldwide Sports Investments are truly set at the forefront of the golfing world and understand what potential investors want for their money.” Not according to Chubby Chandler they’re not. They’re also pushing Lee Westwood’s association quite heavily here. As you can see from the attached picture, there are still some pages of the old WSI website floating around in which Chubby Chandler is pictured with the board members of WSI. 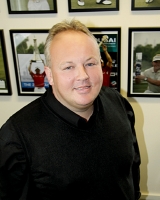 So what is Worldwide Sports Investment’s record in the property business? Not great to be honest. Mr. Smullen has previously been involved in a development in Sesimbra, a Portuguese bay south of Lisbon, which was by his own admission a disaster. The sole selling point for the ‘Westwood 100 Club’ is that WSI will take run down and under performing golf resorts, it will stick the famous golfer’s name on the resort and hey presto, it’ll fill the resort up enough to generate the exceptional returns being promoted. The truth of the matter is that nobody in WSI has any experience of running a resort of any description – something one would have thought would have been a prerequisite for any company hoping to rebrand and relaunch flagging resort courses.

In fact, WSI started out claiming it was going to ‘purchase’ courses around the world and breathe new life into them. It has since reviewed that decision and is now just ‘renting’ them. A significant change in tack – and a huge drop in potential outlay. It is believed that WSI felt that it initially had £50m of ISM’s money to play with, but when the deal didn’t go through as expected the money was taken off the table and WSI’s financial wherewithal is now substantially reduced.

WSI has set up a Deleware LLC (Limited Liability Company) to run its ‘business’. The only reason to form a Delaware company is for opacity. Delaware’s laws are famously arcane and it is almost impossible to find out what any of them do, who is involved, what income is derived, where its funds go, etc. Hence it is thought that a huge amount of the world’s email spammers are based in Delaware, or operating through companies based there. It’s just that sort of place. It’s certainly not the kind of place you’d want to see a company in which you are considering investing to be based. There’s simply no way to figure out what the company is doing with your funds, transparency is at a premium. That’s what Delaware LLC’s do best.

The lack of management experience is already showing as WSI has run into serious problems with its first project – Monte da Quinta in the Algarve. It got the resort, but it has no courses on which visitors to it can play. It is surrounded by Denis O’Brien’s Quinta do Lago resort, but QdL has no interest in having MdQ’s patrons play its courses – which has left them somewhat bereft. Now patrons at MdQ will have to be bused to other resorts to play a round of golf, which is patently ludicrous and not really a great enticement for anybody to visit.

Do we think WSI is a fraudulent company? Not really, or certainly not intentionally. They’ve only proven so far that they are remarkably inept, but that is something an investor simply can’t countenance and the result is the same as if you invested with a fraudulent company – you lose all your money. You really don’t want to be paying for them to learn as they go because they’re doing so with your money. It appears that ISM has reached much the same conclusion and is rapidly trying to distance itself from WSI, but WSI is clinging on to the association by its fingernails – it really is the only selling point its got. If you’ve given WSI money it is highly advisable that you look for it back, the returns promised will never materialise.

You know what they say: “If it looks too good to be true then it probably is”.

There is an update on this story here.

Worldwide Sports Investments (website now completely off-line) has been issued by the Companies House with a GAZ1, which is a first notification of strike-off action in the London Gazette (Section 652) – May 29th 2012 edition as far as I am aware. In this instance it has been issued for non-filing of accounts which were due on Feb 2012. See here.

Where is Chris Smullen now?

It appears at time of writing this addendum (August 2013) that he’s on the Spanish Balearic island of Mallorca apparently involved in betting shops in some of the many English pubs on the island. If you keep an eye on this Facebook page you should be able to track him down if you would like to ask him where your money went. The Three Lions Pub in Palma de Mallorca seems to be a favourite – if Liverpool FC are being televised it’s very likely you’ll find him there.

Update: In 2013 Worldwide Sports Investments Limited was put into compulsory liquidition by the Insolvency Service owing £278,000 to investors. It is reported by Andrew Penman in the Mirror that Smullen used £194,914 of ‘investors’ money to fund a gambling habit. Christopher Smullen was subsequently banned from being a director of a company in the UK for 13 years.

Update – July 2015: You can read a damning report here from the Insolvency Service, in which it says that Smullen and Sean Keating stole €278,000 from ‘clients. It states that Chris Smullen “caused investment monies totalling £194,914 to be used for gambling, resulting in net losses of £11,629 to WSI.” It ultimately barred Chris Smullen from being a company director for 13 years and Sean Keating for 6 years.

***Most recent Update – June 2016: Christopher Rooney has been in touch to say that, having taken Chris Smullen through the UK court system and presenting a personal victim statement, Chris Smullen received a 21 month prison sentence, reduced to 14 months allowing for a guilty plea.
Mr. Rooney has asked anybody caught up in the Smullen run Vale de Paderia scheme to take action to make sure he receives the appropriate sentence for this deceit. You can contact Chris on 079 4658 1755 or email christopherjohnrooney@hotmail.co.uk.***