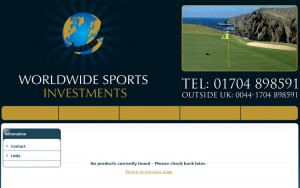 If you read the previous piece on Worldwide Sports Investments (WSI – see here) then you’ll know that its rather shaky business model was almost totally reliant on a highly promoted connection to Chubby Chandler and his widely known International Sports Management company. A connection, it must be said, Chandler was quite quick to deny even though he was listed as a director of WSI.

This tenuous link was severed on December 20th 2011 when Andrew ‘Chubby’ Chandler resigned as a director of Worldwide Sports Investments. As the old WSI website linked above so prophetically says; “No Products Currently Found – Please Check Back Later”.

The connection to ISM was, in effect, WSI’s business model. It claimed that it would take under performing golf courses and brand them with the name of a high profile ISM client (Lee Westwood, Darren Clarke and Rory McIlroy when he was with ISM, were regularly mentioned). This branding would then, in their opinion, lead to the once flagging resorts returning to a scenario of profit. With a large pool of high profile sports personalities to choose from you could see how the proposal might work, in theory at least. Unfortunately, without the connection to Chandler and his company WSI has nothing at all to offer investors. The USP suggested in the company’s promotional material simply doesn’t exist anymore.

If you are considering investing with WSI it is advisable that you do a lot of due diligence in advance, querying the business model, what it intends to do to plug the huge gap left by Chandler, how the figures are calculated, how it proposes to validate figures run through a Delaware corporation, what happens if the projected targets are not met and how exactly your investment is secured. Personally I wouldn’t be inclined to consider it as an investment that is likely to pay out as outlined in the long term. The figures and business model simply don’t add up, particularly in light of recent developments.

If you’ve already invested with WSI then I’m afraid to say it’s probably time to start looking for your money back. The premise on which you originally invested is no longer valid, the investment is never likely to materialise as planned, so now would be a good time to query where your money has gone. If you’re getting no response (which seems to be fairly common for clients who’ve been in touch with the company already) then it may be time to consider options such as filing a complaint with the police.

Updates on this story:

Worldwide Sports Investments (website now completely off-line) has been issued by the Companies House with a GAZ1, which is a first notification of strike-off action in the London Gazette (Section 652) – May 29th 2012 edition as far as I am aware. In this instance it has been issued for non-filing of accounts which were due on Feb 2012. See here.

Where is Chris Smullen now?

It appears at time of writing this addendum (August 2013) that he’s on the Spanish Balearic island of Mallorca apparently involved in betting shops in some of the many English pubs on the island. If you keep an eye on this Facebook page you should be able to track him down if you would like to ask him where your money went. The Three Lions Pub in Palma de Mallorca seems to be a favourite – if Liverpool FC are being televised it’s very likely you’ll find him there.

Further Update: In 2013 Worldwide Sports Investments Limited was put into compulsory liquidition by the Insolvency Service owing £278,000 to investors. It is reported by Andrew Penman in the Mirror that Smullen used £194,914 of ‘investors’ money to fund a gambling habit. Christopher Smullen was subsequently banned from being a director of a company in the UK for 13 years.

*** Most Recent Update – July 2015: You can read a damning report here from the Insolvency Service, in which it says that Smullen and Sean Keating stole €278,000 from ‘clients. It states that Chris Smullen “caused investment monies totalling £194,914 to be used for gambling, resulting in net losses of £11,629 to WSI.” It ultimately barred Chris Smullen from being a company director for 13 years and Sean Keating for 6 years. ***