Here we will have updates on the ongoing Michael Lynn Court Case as it progresses through the Irish court system. If you’re looking for a little background on Michael (Mick) Lynn, former Irish solicitor and overseas property salesman (via his KenDar Holdings organisation) then you can find ample information here. The next step in Mr. Lynn’s proceedings is on March 23rd, 2018 in the Dublin Circuit Criminal Court. 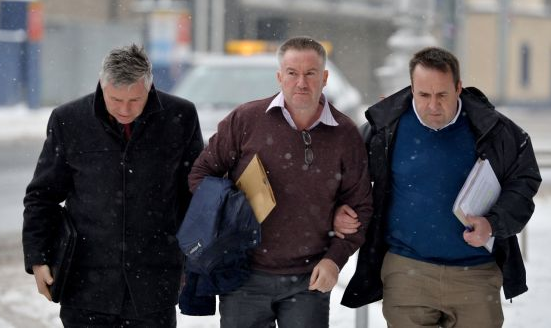 Mr. Lynn, who is now resident at St Alban’s Park, Sandymount, Dublin, is on Unemployment Benefit.

Lynn brings a High Court Challenge to the decision to refuse him disability benefit.  He claims he is entitled to it over the effects of severe mental trauma he suffered while being held four four and a half years in a Brazilian prison.

He was brought before the Dublin District Court yesterday afternoon having been extradited from Brazil and flying back via Frankfurt. His bail application was refused.

Garda Inspector Pat Linehan told the court Mr Lynn was arrested at Dublin Airport at 1.47pm and when cautioned had nothing to say. He was brought to Ballymun Garda Station where he made no reply when each of the charges were put to him.

The charges involve seven financial institutions and are alleged to have occurred in October 2006 and June 2007.

Insp Linehan objected to an application for bail and said that in his view Mr Lynn was a flight risk.

He said the former solicitor was arrested in Brazil on August 29th, 2013, on foot of a request from Ireland and had been in custody there. His extradition had been ordered in December 2014 but Mr Lynn had initiated a number of legal processes which had the effect of “dramatically delaying” the extradition.

He said that in view of the seriousness of the charges and other matters, he felt Mr Lynn should not be granted bail. During a civil action before the High Court an order for the attachment of Mr Lynn had been issued in December 2007, arising from his failure to attend court.

Insp Linehan told the court of a number of failed attempts to meet voluntarily with Mr Lynn after he had left Ireland in late 2007. “The reality judge is that we were being given the runaround.”

Mr Lynn (50), formerly of St Albans, Sandymount, Dublin, told Judge Gerard Jones that he had always travelled on his own passport when living abroad.

He rejected the suggestion that he had chosen to go to Brazil in the hope he would not be extradited. “The day of Ronnie Biggs is over,” he said.

Mr Lynn said he had never been a fugitive or a flight risk. “I am here to face these charges and get this aspect of my life over with.”

He said he had been advised that his appearance before the High Court in 2007 might have conflicted with his right to silence in relation to any criminal matters that might arise. He said the failure of voluntary meetings with gardaí in England and Portugal to go ahead, prior to his moving to Brazil, were in part due to confusion and the involvement of multiple legal teams.

The court heard that Mr Lynn’s wife, Bríd Murphy, and the couple’s four young children, were moving back to Ireland from Brazil. Mr Lynn, who was wearing dark trousers, a maroon pullover and an open-necked shirt, was greeted in court by his sister Anne, who later offered to put up an independent surety of €100,000.

She told the court of her efforts to put in place somewhere for Mr Lynn’s family to live when they returned to Ireland “so they would have a home and a place to start”.

Asked if she was close to her brother, she said she was. She agreed that Mr Lynn had not come from Brazil to visit her in the period after he moved to live there in June 2011.

The judge said that in his view Mr Lynn was a flight risk and that it was no coincidence that he had settled in Brazil, a country which at the time had no extradition treaty with Ireland.

Mr Lynn was remanded in custody to March 23rd to Dublin Circuit Criminal Court. An application for legal aid, on the grounds of Mr Lynn having no assets, was granted.

Article courtesy of the Irish Times.

Below is a 2013 interview Michael Lynn gave to former Dublin solicitor, David Elio Malocco, in the ill-fated ‘Dublin’s Best’ magazine, is reproduced below: 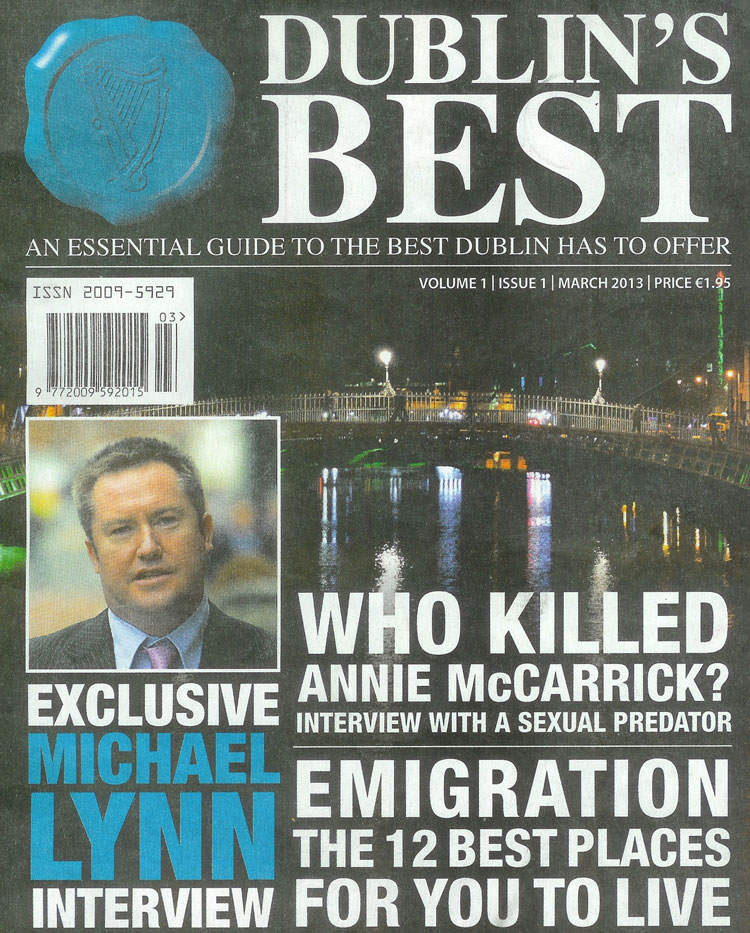 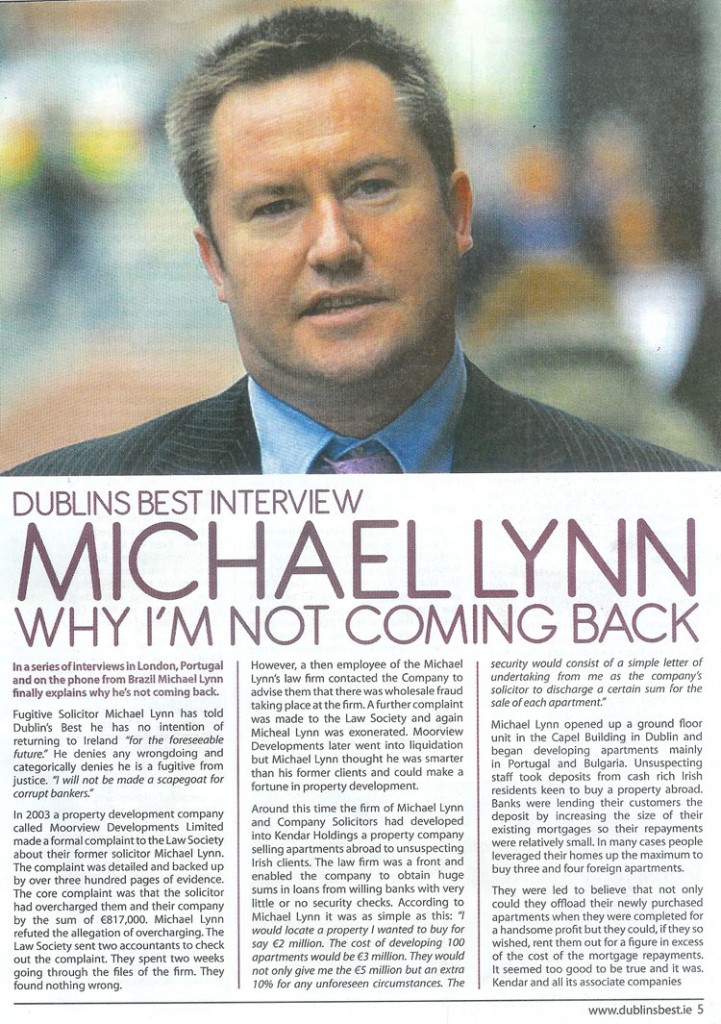 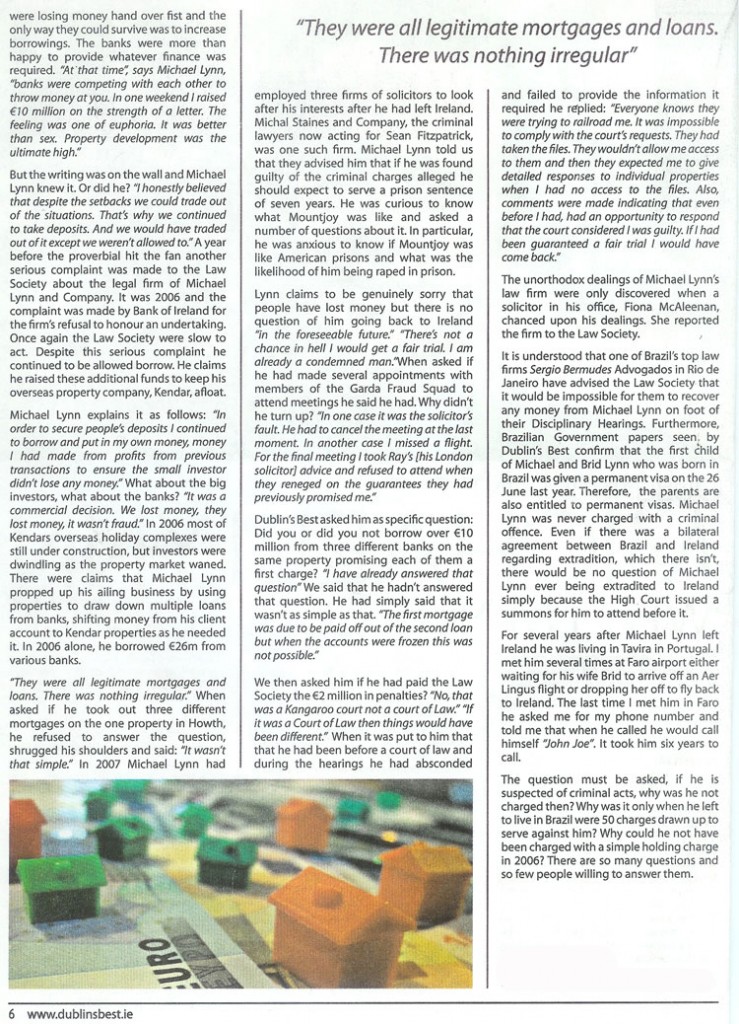