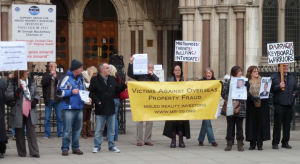 A march took place on January 4th last against overseas property sales company and developer, MRI Overseas Property, which was formed in 2000 by Dubliner Darragh MacAnthony. The company’s sales exhibitions were a regular presence in Leopardstown, Limerick Racecourse and the King’s Hall in Belfast during the peak of the property boom years. At one stage MacAnthony claimed his company was selling “a property every 42 minutes” and it launched a property channel on the Sky platform, run by MacAnthony’s sister, Wendy.

The company has since, however, been very badly hit by the economic downturn and has, essentially, been wound down. As MRI departed the fray most of its offices were taken over by MacAnthony’s close friend and longtime MRI employee, Michael Liggan, who formed the company DCC International Property.
The march was to protest at the treatment of clients by MRI, who claim that they have been misled and defrauded out of funds paid to the company for property, furniture and management services that were never provided.
Another march is planned for March 24th 2011 at 10.30am at the House of Commons in London to 10 Downing St. to hand in a 2nd petition.
The Olive Press ran the following brief overview of the events:
“VICTIMS of the alleged Marbella property fraudster Darragh MacAnthony staged a protest in London yesterday.
The Misled Realty Investor Support Group delivered a petition to No 10 Downing Street demanding action against his Spanish based company, MacAnthony Realty International.
It carried over 800 signatures from people who claim they were conned by the MRI sales team and collectively, have lost millions of pounds through bogus property deals.
The march began outside MRI’s notorious law firm, Carter-Ruck near St. Paul’s, and received support from East Antrim MP Sammy Wilson.
Mr Wilson joins members of the group who are seeking changes to the current UK and EU legal system, which has not protected these investors from losing retirement funds and savings to corrupt developers.
For further information on the upcoming march contact www.mri-sg.org.