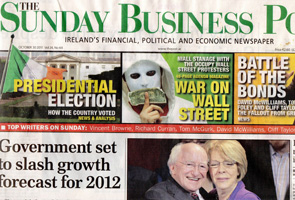 My heart goes out this evening to all my former colleagues in both the Irish Examiner and Sunday Business Post newspapers. I spent many happy years writing for both titles and have a good many friends still at both. The news of a receivership, even though in the case of the Examiner newspaper it is a  ‘pre-pack’ version, is not something any employee of a company wants to hear, particularly in the current economic climate which is not at all conducive to finding a funding for a newspaper vehicle purchase. Receivership, examinership and thriving company are not concepts that go hand in hand. This process has been necessitated because the Thomas Crosbie Holdings group has been performing abysmally for many years now.

I would be especially worried for my former colleagues at the Sunday Business Post which seems to have been dangled in the wind in this particular exercise. It would appear that it is being seen as a symptom of the excesses of the former management team of Thomas Crosbie Holdings (TCH), predominantly overseen by Anthony Dinan who negotiated the purchase of the Sunday Business Post by TCH, and as such is now deemed to be surplus to requirements. Landmark Holdings appears to have specifically omitted the Sunday Business Post when choosing which assets of the former TCH portfolio it should bring under its control. The Sunday Business post was subject to different lenders and lending practices than the rest of the TCH group and it is thought that Landmark may seek to reconnect with the newspaper during its period of examinership.

Landmark Holdings is the vehicle of Tom and Ted Crosbie, so the main assets of the group will remain in the Crosbie name. It has jettisoned its connection with a particularly problematic element, the expensive contract with the print arm – Webprint Concepts Limited in Mahon – which will be responsible for most of the job losses quoted.

While the Examiner has been struggling for a long period (sales are down over 25% over the past five years), as has the Evening Echo, it appears that the Crosbies could not eschew the magnetic attraction to ‘Da Paper’. Their predecessors had an enduring connection with the publication over several generations, which originated as the Cork Examiner in 1841.

The Sunday Business Post is a far younger title, tracing its roots only as far as 1989. During that time, however, it made a significant name for itself. It is also, now, in a very precarious state. Apart from a few years during the post Millenium boom in Ireland, when it raked in bumper property advertising income, the title has never been particularly profitable. This is despite the fact that it has a very high profile and marketable brand. From having spoken to many people about the title over the past few years there seems to be a widespread feeling that it had lost its way somewhat in recent years. Where it founded its name on young and vibrant journalists vying to make an name for themselves and being given their head to do so, there is a feeling that many of these young buccaneering journalists are now middle-aged and settled – the paper seems to have taken this course with them. It has become ‘safe’ and has lost the ‘provocative’ nature that created its reputation. This is a great shame, because for many years it lit a new, more inquisitive, path for other newspapers to follow.

The market for newspaper titles is, at this point and time, virtually nil. The demise of the Sunday Tribune is fresh in the minds of all of us in any way connected with the newspaper industry. There are great fears that the Sunday Business Post will also make its way along this well worn path. This would indeed be a sad day for journalism in Ireland and those of us who enjoy choice and variety of ideas would fear very much the sanitisation of the Irish Sunday newspaper market that this may bring.

In his statement, Tom Murphy, former CEO of TCH and now CEO of Landmark Media Investments Ltd. singularly failed to mention the Sunday Business Post or its employees in any way:

“Following a prolonged period of uncertainty, today’s developments represent an important opportunity for the Irish Examiner and associated titles and media to make a fresh start and that is very welcome news. In a challenging environment, this re-structuring and consequent acquisition provides a stable platform from which to build a sustainable business. I look forward to working closely with the management and staff to review and improve operations to successfully achieve this aim.

I would like to thank all staff members for their support, commitment and especially for their patience in recent months.”

Many of us will hold out, what seems like fading, hope that the Sunday Business Post is, first and foremost, in a position to find a buyer. Should that occur we will very much hope that it will find one that can live up to and enhance its reputation of being a brand leader unafraid to take chances. We hope, but we fear this hope will be in vain.