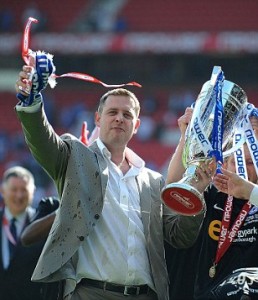 All Not Celebratory for Darragh MacAnthony

The Daily Mail and Cyprus Property News carry a story relating to Darragh MacAnthony, current owner of newly promoted Peterborough United and former boss of MRI Overseas Property. In the Mail it is alleged that MacAnthony and former joint chief executives, Michael Liggan and Dominic Pickering, now “face legal action in Spain after hundreds of Britons allegedly lost money estimated to amount to £13million.” In the Cyprus Property News it says that they are “accused of ‘theft by… misappropriation of funds’ in a claim filed in Madrid by 60 British and Irish claimants who say they lost more than half a million pounds in undelivered furniture five years ago.”

Dubliner MacAnthony, who moved to Marbella in his teens, was well known across Ireland due to the heavy promotion of his MRI brand in the early to mid-noughties. The company was renowned for huge marketing campaigns where they block booked exhibitions in Limerick Racecourse, Leopardstown Pavillion in Dublin and the Kings Hall in Belfast. The company operated across a number of countries, most notably Spain, the US (Florida mainly, where MacAnthony now spends much of his time), Bulgaria, Cyprus, Morocco and Cape Verde. They have often been accused of being a heavy selling organisation, something which MacAnthony has denied vehemently. The company has also been the subject of a number of Exposés, most famously at the hands of the Sunday Times and BBC (most of which can be found on YouTube).

MacAnthony and his former colleagues have consistently denied any wrongdoing, but pressure on them has grown over time, particularly from disgruntled investors who set up the MRI-SG (Misled Realty Investors Support Group) website.

The reports go on to state that in 2008 the National Federation of Property Professionals said it was ‘appalled to hear of the company’s misleading business practices’.” MacAnthony denied all charges and resigned.

The articles also state that MRI has been investigated by the Serious Fraud Office (SFO), something which MacAnthony denies. The articles say the SFO took no action, saying that although it did not intend to prosecute anyone, this did not mean that an offence had not been committed elsewhere. In his blog MacAnthony states: “… nor have I ever been spoken to by the SFO or arrested like some claim on certain websites.”

It is alleged that last October MacAnthony and Pickering, as directors, handed MRI Overseas Property Group to a Peruvian company, under the directorship of octogenarian Fernando Arespacochaga, which appears to have never traded.

The Daily Mail article can be found here and the Cyprus Property News one is available here.

On June 4th, (the day before the Daily Mail article), Darragh MacAnthony wrote a piece on his blog entitled: “How I deal with extortion, blackmail and media persecution.”

It begins: “The reason for writing this article and posting it on my website and giving it to the local press is because to be honest with you, I’m fed up and had enough of the nonsense written about me on the web and in fact by the media when it suits them. I am also fed up with constant unfounded allegations, lawsuits and blackmail.
In the coming days the Mail on Sunday or some other media outlet will write a story…”

In the blog MacAnthony reproduces documents (emails) which he claims negate the legal claim by solicitor Antonio Flores, who MacAnthony refers to as “an ambulance chaser”. He also claims that the only reason to bring the case in the court in which it is to be held in Madrid is for the added media coverage it will glean for the plaintiffs.

It is quite long so I’ll not reproduce it in full, but for those who do wish to read it the full blog posting can be read here.

Update: When this case did ultimately reach court in Marbella the judge refused to hear the case on the basis that it was not her jurisdiction to do so. Flores has said that his clients are appealing this claim.